So, it’s Thanksgiving evening. I’m enjoying a very nicely-earned turkey coma. My brother-in-law has some show about a duck dynasty on the television and I can’t believe how redneck my family is becoming. Or, is it just that we live in an area where talking about deer ruts is so common place that I’ve desensitized myself. 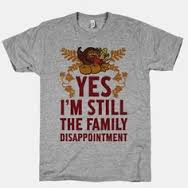 It’s kind of that way with writing, too. Sometimes, it’s easy to get desensitized by your dreams and forget that you have to, you know, produce something.

Let me tell you, I have Dreams. I’m working on my third YA novel right now, about a military school and secret societies. I’m revising my second. My fourth is in the planning stages. All YA. All contemporary. All super-angsty, like that little 15-year old girl inside me whose never really grown up or gotten over anything that happened to me back in high school.

But to make this dream become a reality, I’ve got to let go of the dreams while striving for them all the same. In order to get with those other greats, I’ve got to suck it up and move past the dream. I’ve got to work.

If you follow me on Twitter (@joynhensley), you’ll know that today I’m celebrating a victory. See, there’s this writing competition every November, much like the No-Shave-November competition between my husband and myself, only with writing.

The writing goal in November for those of us willing to accept the challenge, is to write an entire novel, or 50,000 words during the month. If you do the math, that means writing 1,667 words a day, every day from November 1st-31st in order to get that done.

That’s insane, right? I mean, I’ve tried it for the last five years. Usually I fail somewhere around 12,000 words because, well, it’s dark. And it’s cold. And in November there are All. The. Shows. I mean, seriously, there is so much going on how in the world can I find anytime to write?

But that’s just it. Lots of people have ideas. Lots of people want to write books. But the only books that ever get published are the ones that are written. So, while a 50k word goal is INSANE in a month, it does get one thing accomplished.

It gets me writing.

And let me be honest, there are days I didn’t write. If I look at my words per day in November, I’ve actually only written 19 days. But in those 19 days, I’ve written 50,013 words. I’ve missed television shows. I’ve worked for three hours some nights without doing anything else. My house is a mess, I’ve got so many clothes to wash I may cause a water shortage in my town this weekend. Sure, I put off some stuff I would have enjoyed doing, but to me it was worth it.

You can make up all the excuses you want—new show on television, Black Friday sales you’ve got to get to—but in the end they’re all excuses. If you want to write, you’ve got to make the time.

I’m not done with the book, not by a long shot, and when I do finish it (which I plan to by the end of November) it’s still only going to be the first draft, which means lots of work ahead. But the thing is, you can get through draft two, draft three, or draft one, for that matter, without sitting down at the keyboard and writing, or in your comfy chair with a pad and paper—whatever you need, get it. Sit down. Write.

I could spend hours scouring the internet for books. And to be honest, sometimes I do. I usually end up thinking things like this:

I wish I could write a book like that.

I had that idea a year or so ago. If only I’d written it…

Why didn’t I write that book about sparkly vampires that I dreamed up ten years ago?

Because here’s the truth. The truth from within the trenches of the writing war. All those dreams you’ve got, all those stories trapped inside—they don’t amount to a hill of beans unless you actually write them. Unless you put pen to paper or fingers to keyboards.

Like I tell my writing students, the first draft can be as messy as you want. Let it be crap—give yourself permission to suck. Your first draft is not going to be a bestseller on the first draft. Just get the freaking story out on paper. Once it’s there, then you can call yourself a writer.

But you’ve got to get up off your butt (or in this case, make yourself sit on your butt) and get it done. And it’s that way with any dream you’ve got, with anything you want to achieve. You can’t just expect it to come to you.